African Americans have had a long and rich history in the United States and have participated and influenced this nation's history from the very beginning. Black History Month was created by historian Carter Woodson, who believed African Americans were not adequately represented in the study of American history. This is a time to celebrate their accomplishments and contributions to the American annals of history. The story of the Africans in America did not begin with slavery, nor did it end there. Here are three lesser-known facts of our American history that helped shape our culture and the world.

La Niña, La Pinta, and La Santa Maria: Which one was owned by an African descended family?

Many Africans traveled and explored the seas and the New World as free men in search of fame and fortune. Those who lived on the Iberian Peninsula were even conquistadores. There were many that played an integral and unheralded part in the European discovery of what they called the New World.

On board as sailors, pilot, and Captain for Columbus's first, second and third voyages were the famous Niño brothers of Spain. Pedro Alonso, Francisco, Juan, and Bartolomé, were all well known for their expertise in sailing the Atlantic. Pedro Alonso piloted the Santa Maria and was named by the Catholic Monarchs Ferdinand and Isabella "Chief Pilot of the Ocean Sea" (the Atlantic) as recompense for his services to the crown. Juan, the eldest brother, owned one of the other famous ships on Columbus’s first voyage, La Niña, which was named after the famous and prominent Niño family. And, they were all of Moorish (African) descent.

Who was the first slave owner?

Born in Angola, Africa, "Antonio, a Negro" as he was listed, was stolen, transported on the ship the James, then sold at auction in Virginia in 1622 not as a slave, but as an indentured servant, because Virginia had no rules on slavery at the time. Charles Johnson and Patricia Smith, historians, explain:

Both African slaves and European indentured servants labored in Virginia in the 1620s. Indentured servants agreed to work for a planter for a specific period of time in exchange for their passage to the New World, and then they usually became free. Slaves were forced to North America, but in the seventeenth century, they were also often able to earn their freedom.

Antonio eventually changed his name to Anthony Johnson, and by 1650, he had worked off his indentured status, married, and owned 250 acres along the Pungoteague Creek on the eastern shore of Virginia. To work his holdings, he hired indentured servants, one whose name was John Casor.

Unfortunately, John was accused of fleeing his indentured contract early and was brought to trial by Anthony. By the end of the proceedings, it was ruled that John would remain with Anthony for life, as a slave. The Smithsonian Magazine, writing on The Horrible Fate of John Casor, The First Black Man to be Declared Slave for Life in America says:

After a disagreement about whether or not Casor's contract was lapsed, a court ruled in favor of Johnson and Casor saw the status of his indenture turn into slavery, where he—not his contract—was considered property. Casor claimed that he had served his indenture of "seaven or Eight years" and seven more years on top of that. The court sided with Johnson, who claimed that Casor was his slave for life.

The court’s decision in favor of Anthony changed American history forever. Only seven years later, in 1661, Virginia made the practice of slavery legal for everyone. 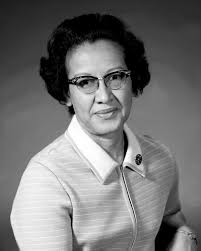 "Math. It's just there…You're either right, or you're wrong. That's what I like about it." Katherine Johnson

African American. Woman. Mathematician prodigy. Katherine Johnson's life would not follow the strict expectations of the segregated 1950s. Yet, her genius would be recognized and affect the scrolls of American history. Johnson's contributions as part of the NASA team in 1953 propelled the United States to the moon and back. According to an oral history archived by the National Visionary Leadership Project:

At first, Johnson worked in a pool of women performing math calculations. Katherine has referred to the women in the pool as virtual "computers who wore skirts." Their main job was to read the data from the black boxes of planes and carry out other precise mathematical tasks. Then one day, Katherine (and a colleague) were temporarily assigned to help the all-male flight research team. Katherine's knowledge of analytic geometry helped make quick allies of male bosses and colleagues to the extent that, "they forgot to return me to the pool." While the racial and gender barriers were always there, Katherine says she ignored them. Katherine was assertive, asking to be included in editorial meetings (where no women had gone before). She simply told people she had done the work and that she belonged.

Katherine Johnson co-authored numerous scientific papers, became a pioneer in space and mathematical science and would receive numerous awards and accolades throughout her notable career. As of the writing of this article, Johnson remains at, 100-years-old, an influential role model for all Americans. You may have seen the movie in which she and other prominent African Americans were spotlighted, Hidden Figures.